When It Comes to Signaling Global Growth, Oil is Slippery

Now, we'll look at another commodity which might be able to help us get a glimpse at what the 'crowd' of global investors see about the economy, and which experts might be missing. That commodity is oil.

Oil is a celebrity commodity. It gets more coverage probably than any other commodity except gold, and during times of middle east upheaval, it tends to get even more coverage. Copper is comparatively boring. We're going to argue that though oil is more exciting, it's probably less useful. Sometimes boring is good.

Let's do a quick recap of the reasoning behind using these commodities to forecast the economy. When the economy heats up, it usually consumes more basic resources. Builders use more copper, more aluminum, and more lumber. Electronics manufacturers use more gold, silver, and rare-earth elements. And pretty much everybody uses more energy. Energy is the "Master Commodity," the stuff which turns all the other commodities into goods. That bauxite isn't going to melt itself; it takes loads of energy to turn it into aluminum and loads of energy to turn aluminum into siding for your home. So, as various businesses sense growing opportunities in their specific little corners of the market, and the world, they go out and place orders for the commodities which they use to serve these possible new customers.

But you might remember in our prior discussion about copper, sometimes the price of something goes up because people want more of it, or sometimes it goes up because there is less of it available, or sometimes it goes up because of general price inflation. Sometimes it's all of those. So, in order to estimate how much of the price increases is due to rising demand (which we believe signals global recovery), we first have to adjust that price to account for the other factors, such as lower production and inflation, so that we can focus more on the demand side of things.

So, first let's look at oil prices over time:

You can see just by looking that some of the same spikes and troughs which accompany booms and busts that showed up on the copper chart are here too. Oil prices rose with the late ‘90s tech bubble and sold off when it burst. Prices rose with the booming economy after the 2003 tax cuts and collapsed with the Great Recession (and again spiked when the recession ended). Prices rose again with the 2017/2018 tax cuts, and collapsed terribly during the worst of the COVID shutdowns. Oil prices were hit so hard during the COVID crisis that some oil future markets actually showed negative prices. (If that sounds confusing, here's an explainer we wrote at the time.)

But we see some other things, like price spikes associated with the invasion of Kuwait in the early ‘90s and the first Gulf War. We see price spikes involved with the events of 9/11 and the second Gulf War. It seems that oil sort of slides around, not just based on fundamental supply-and-demand factors, but also as a reflection of geopolitical risk factors and Gulf State cartel politics. For those who are using oil to track Middle East political risk, that might be useful, but for those who are trying to use it to track global growth expectations, it is potentially a source of noise.

So, let's take a look at how good oil is at predicting global growth. This data has undergone the supply and inflation adjustments that we discussed above: 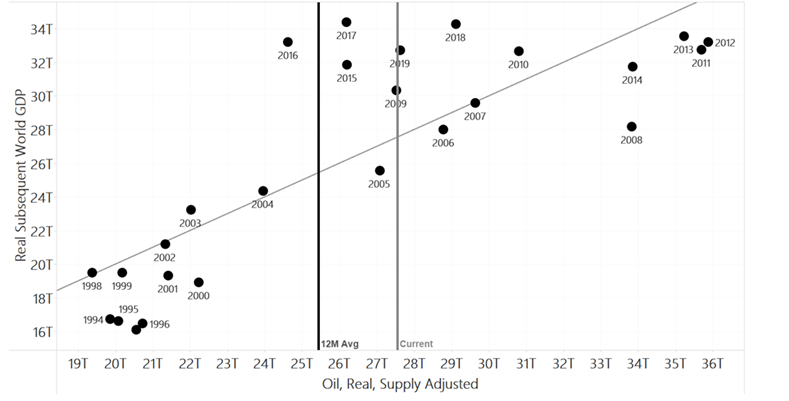 (Source: Federal Reserve Bank of St. Louis, Bloomberg, as of 6/30/2021 or most recently available)

The trend line on this chart slopes up. We believe this is a good sign; it means there is a positive correlation between adjusted oil price and subsequent global growth, which is what we would expect. The demand theory, therefore, generally seems to have gotten the direction right. But how good a fit is this, meaning how reliably does that line predict growth? Answer: Not as well as we believe copper does. Let's put the charts next to another to make this easier to see: 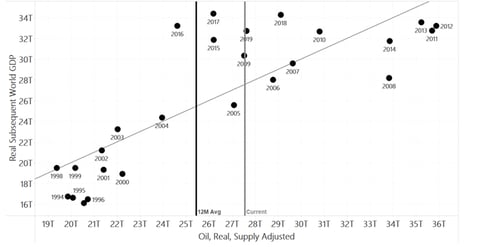 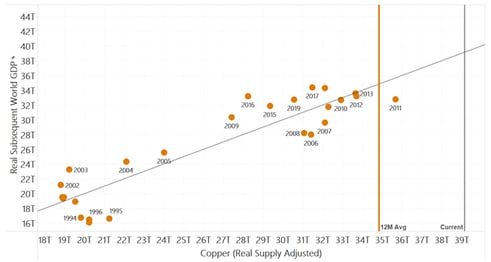 (Source: Federal Reserve Bank of St. Louis, Bloomberg, as of 6/30/2021 or most recently available)

It should be pretty obvious to the naked eye that oil didn’t correlate as well with subsequent global growth as copper did. (The actual correlations tell the same story.) It's also pretty clear to the naked eye that copper is flashing a more optimistic signal about global growth. The lines for the “Current” price (as of 6/30/2021) was further to the right for copper than for oil, so the implied growth rate was therefore not as high for oil as for copper based on these models.

Which indicator is right? We don't know for sure, because no one knows the future, but according to our analysis, copper has been right more frequently than oil in the past.

We'll look at the commodity story and global stock markets next time.