When Inflation is High, Buy High?

The financial industry has various ways of classifying stocks. One is size, but there are also styles of investing, such as buying companies which are expensive (meaning the price is high relative to sales, or earnings or revenues or cash flow, or some other form of income). If stocks are expensive, it's like they are expected to have high earnings growth, otherwise why would investors pay more for them than for the "cheap" stocks?

The chart above shows the performance of Growth versus Value indices during high inflation periods. Growth appears to us to be the superior historical inflation hedge, at least going by this set of examples. This might have been a direct effect of inflation, or it could have been relative to interest rates. The Federal Reserve expands the money supply by lowering interest rates, so this could have reflected the idea that low interest rates coming from easy money might have helped Growth stocks more than Value stocks. More research is needed to get to the bottom of why Growth has tended to be a better inflation hedge, but in the data set above, it appears to us that it was a better hedge, whatever the reasons. 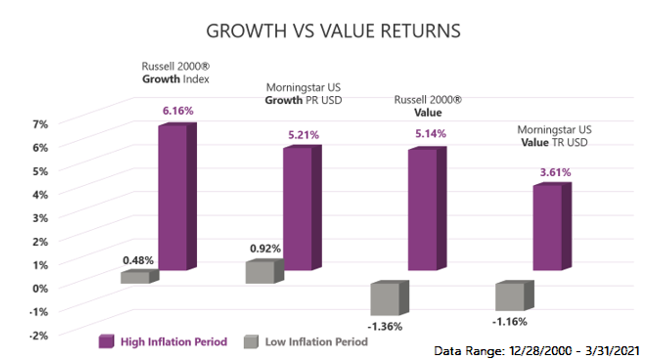 It appears that Growth stocks offered a relatively attractive trade-off in that they performed strongly during high inflation periods, but they still had positive (though much less positive) returns during low inflation environments. The charts above might also show some residual cap size trade-offs in that the Russell 2000® Growth Index Return is more a Mid and Small Cap index than a Large Cap one.

Next time, we’ll look at the global picture when it comes to historical performance during periods of high and low inflation.