What This New Economic CAT Scan Shows About This Recession

In our previous article, I explained how a new statistic, Gross Output (GO) uses free-market insights to get a deeper look into the economy than Keynesian statistics such as GDP and GNP.

Now that we know it's a better 'scan' of the economy, let's use it to take a look at the patient right now to see his current economic health.

First, let's look at three numbers in relation to one another: GDP, GO, and a metric we created which takes all economic output and then strips out government and consumer spending, leaving behind an estimate of production.

We see here that GDP is relatively stable. That's the problem; a lack of variation amounts to a lack of signal. Something has to change in order to change the signal. Note that the orange line, the production estimate, is more volatile. That reflects the idea that business is more agile than consumers. Production and supply-chain managers' jobs are to anticipate shifts in the economy. Consumers tend to spend according to their class and perception of long term earning, which is why stimulus checks never work. Production managers who over-produce are saddled with excess inventory -- dead money, which is a good way to get fired.

You’ll notice that in other recessions, GO and Production tended to precede the recession and to exceed the drop in GDP.

But this recession is different: In both the first and second quarter of 2020, GO went down less than GDP. In other words, the dynamics of this recession skewed away from production effects (compared to history) and towards consumption effects. Doesn't this make perfect sense? Essentially, large swaths of consumption were verboten.

Now, let's take that orange line from the previous chart, the one which shows the difference between GO and GDP, and compare that to a wide survey of manufacturing managers, the Purchasing Managers Index (PMI). 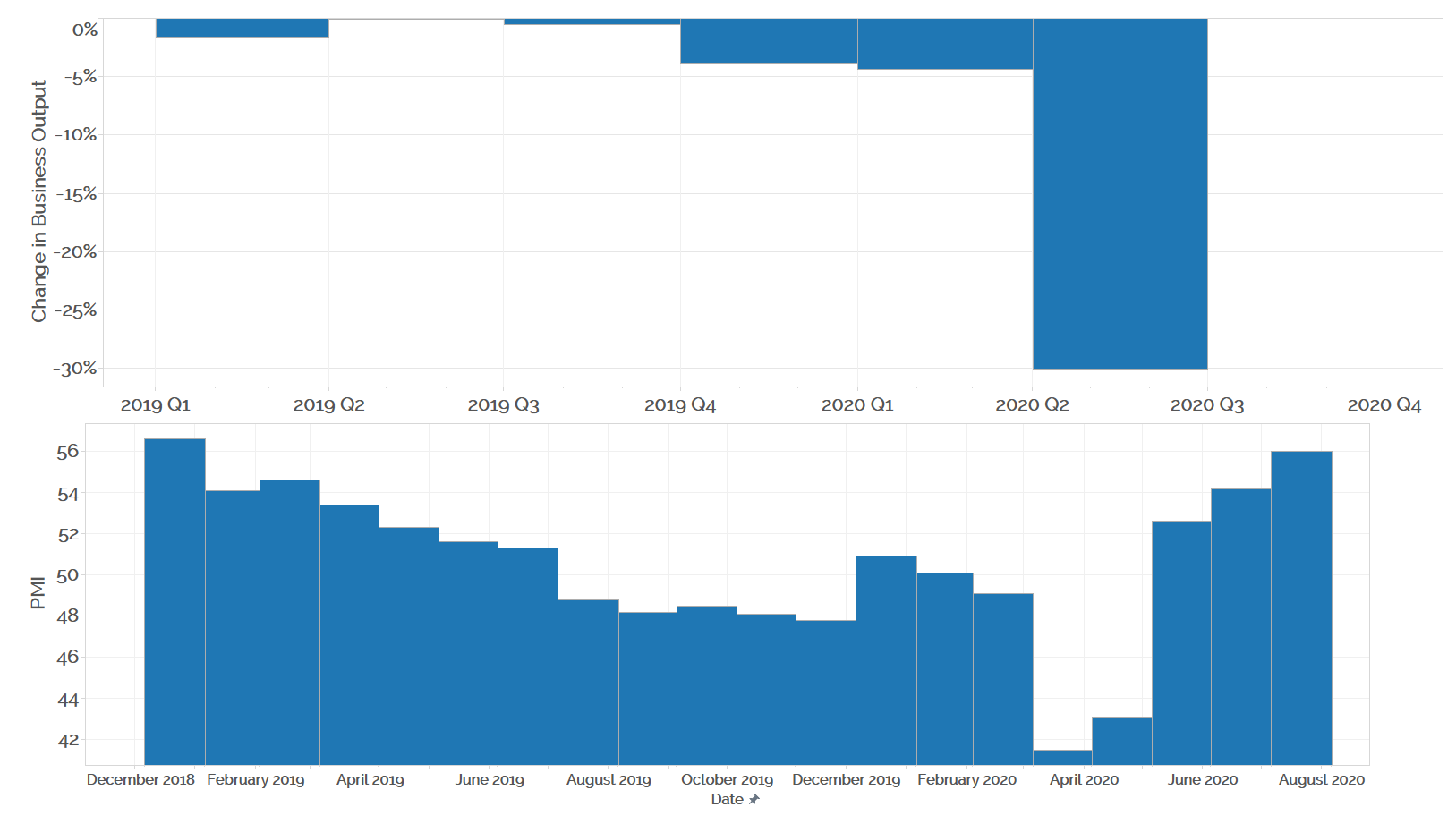 (Source: Bowyer Research, Institute for Supply Management, as of September 2020)

We see largely what we would expect to see: This production metric tended to go down in anticipation of the pandemic in Q4 2019. It went down significantly during Q1 2020, as did the survey of production managers. In other words, production tended to track with real time surveys of managers, which is not much of a surprise, except that it does tend to vindicate the production metric.

We also see the second quarter tracking. Production collapsed as production manager perception of optimism collapsed as well. One can see that manager optimism has been rising substantially in the last couple of months, including the period after the second quarter for which we do not yet have official GDP or GO data. If the pattern holds, we have a reason for optimism. Our first intentional recession (at least since WWII rationing) is ending quickly because consumption was intentionally paused, but production capacity remained intact.