This Data Shows How Weird This Recession Was

First, let me introduce the most important economic statistic that you've (probably) never heard of, Gross Output. It was invented by economist Mark Skousen and was adopted by the federal government, which now reports it quarterly. Unlike GDP, Gross Output includes the stages of production which occur before the transactions which are counted in GDP. It's a fuller picture, more like a cat-scan than an X-ray.

Gross output, or GO, measures the total economic activity in the production of new goods and services. It is a broader measure of an economy than its gross domestic product, or GDP, which is limited to an economy’s final output. 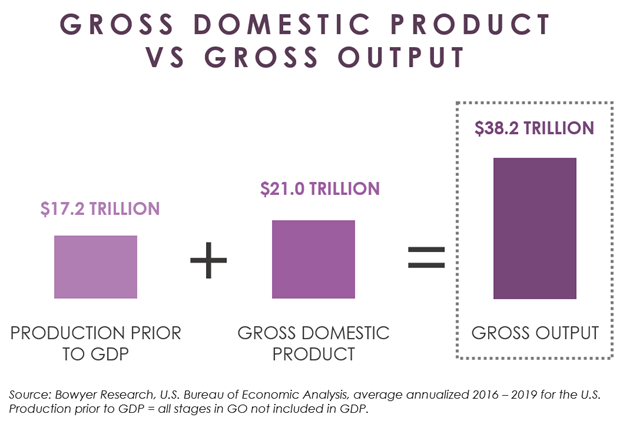 Now that we know what GO is, let's look at how it changes over time. We also subtracted GDP and government spending out of GO, leaving behind an approximation of what we call “Business Output.”

Here’s a zoom-in of the last 4 years. 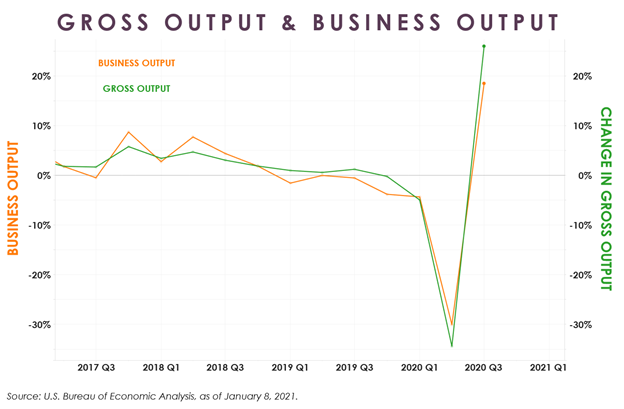 In every other cycle shown, Business Output was more variable than Gross Output. During downturns, business turned down faster. During recoveries, business recovered faster. But in this latest COVID crisis, business was a little less variable. This means that the supply chain was less broken than the final link, retail consumption. Business bet that things would get back to normal and kept growing, refining, building the stuff that eventually consumers would consume. The sharp upturn in the second half of the year shows that they were probably right to do so.

What does that suggest about the future? We took the data represented by that green line above and put it on a bar chart, and zoomed in on recent conditions. That's the top half of the image below. The bottom half is the PMI, which is one of the most common measurements of real-time business optimism by those who run the supply chain.

Not surprisingly, when you line those two things up you see that when the people running supply chains are saying things are bad, supply chains were in fact shrinking. The universe makes sense, at least that part of it.

So what does this pattern suggest about the future? Notice that we don't yet have GO for the 4th quarter, which means we don't yet have Business Output which we calculate using GO for that quarter. But we do have the PMI surveys, and they have been doing quite well, thank you very much, for the past three months. If the pattern holds, that means a good outlook for Business Output.