There and Back Again: The COVID Global Market Roundtrip in Map Form

Literature’s second most famous hobbit, Bilbo Baggins, titled his memoirs There and Back Again. In it, he took a long trip down into the terrifying caves of a deep mountain (actually, two mountains) and came back home with a treasure. It is an extremely common literary theme: Down into the pit, and back out of the pit. It's common because good literature mimics real life stories, even financial ones.

Last year, the world went through a sudden, terrifying pandemic which involved massive government shutdowns and one of sharpest economic contractions in history. Markets responded in kind. And then they made the long trip back home to something resembling normal.

Let's look at the data.

The map below is color coded to represent change in valuation of the stock market of each country in the data set. Here’s how Investopedia defines valuation:

“Valuation is the analytical process of determining the current (or projected) worth of an asset or a company.”

Here's an analogy which might help, but like all analogies, it's not a perfect one: Imagine a store where you can buy "earnings.” You don't buy food or clothes -- you buy profit. If the price-to-earnings ratio of a particular stock (or the average of all the stocks in a particular country's market) is 10, then that means that you can buy one dollar of earnings for ten dollars now. Historically, for developed markets, that theoretical number would indicate quite a low price in reality, or what we might call "on sale.”

But these prices don't stay the same. This theoretical Earnings Store (the stock market) is constantly engaging in "markdowns" and "markups" as supply and demand shift. Imagine going into that store and seeing little tags which say things like, "Price of earnings marked down 20%!" That would mean that the market is having a sale. Of course, there can be markups too, but companies don't advertise those. They don't have little tags saying, "Off sale. Price of earnings marked up 20%.” But in the map below, we will show you both. Green means a “markdown,” yellow means little or no change from the previous period, orange means a “markup,” and red means a higher “markup.”

Let's start by looking at Q1 2020, when COVID was hitting markets hard. 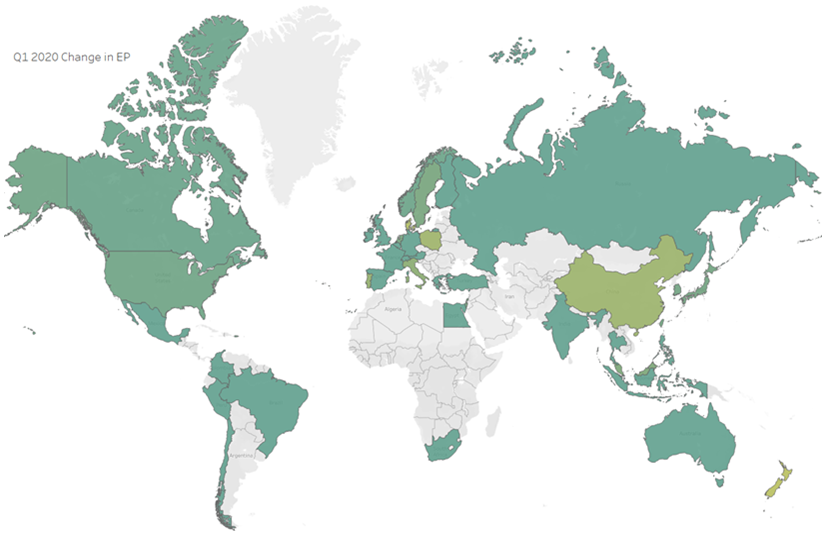 What we can see in this map is, based on the color scale, a global sale on stocks. The price of earnings generally dropped in this period. Earnings were marked down. Financial commentators often call this "compression," which is a pretty good analogy. Imagine squeezing a ball, perhaps a Nerf ball, very hard in early 2020. The COVID crisis squeezed the globe like some gigantic Nerf ball. But when you squeeze a ball, it tends to expand back to normal unless it continues to be squeezed. And something quite similar to this happened to the markets of the world. 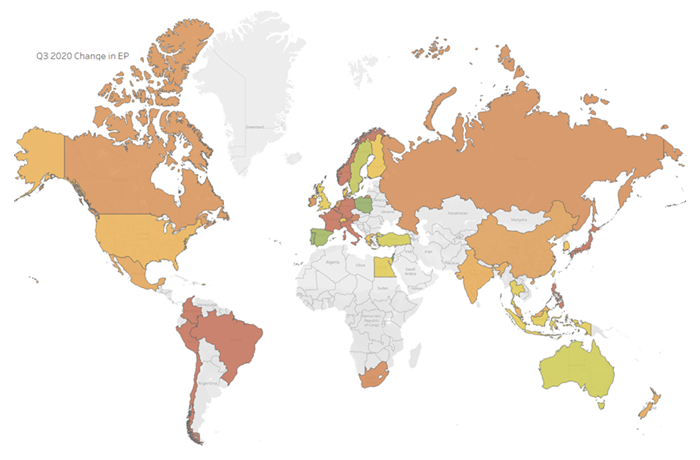 Next up, Q4 of 2020. Less orange, more yellow, red concentrated in certain places, and again, hardly any green. Markets continued to become uncompressed, but in more targeted way. Most stock prices were marked-up again:

Onto Q1 2021. Less orange, more yellow, red concentrated in certain places -- especially Russia -- and some more green than we’ve previously seen. Market decompression was slowing and in some spots reversing. Mix of markups and markdowns. 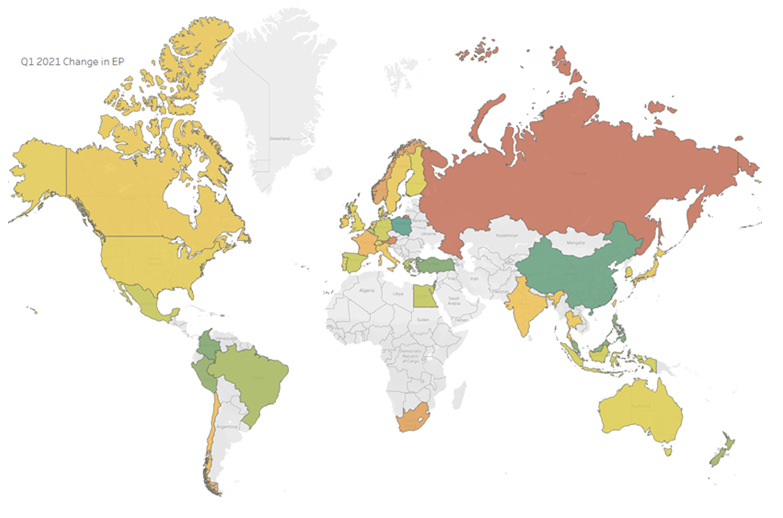 Q2 of 2021. The slow and uneven decompression. Mix of markups and markdowns, mostly the latter. 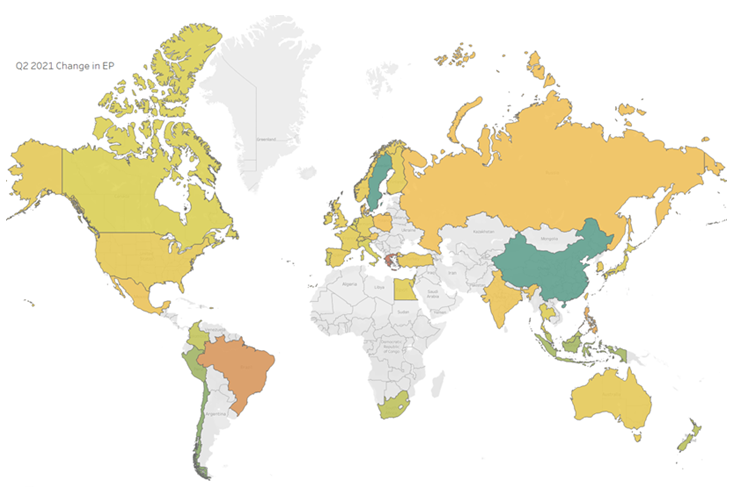 Since this analysis was done in the midst of Q3 2021, when the complete data for Q3 was not yet available, the analysis stops at this point.

What we see looking back at this analysis was a very sudden and very strong compression of valuation (or “markdowns”) in one quarter, and then five quarters of decompression (some fast, some slow); some of this was looking generally at the dataset, and some was targeted at certain countries. There (very fast) and back again (more gradually).

So where does that leave us? 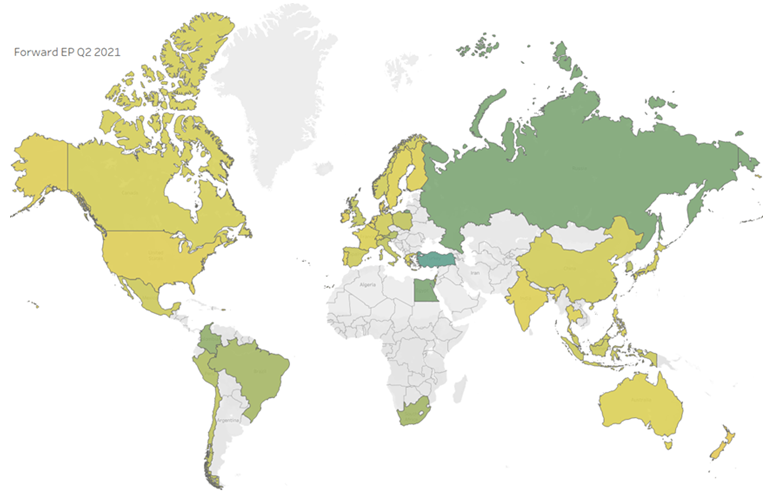 You might think that we accidentally copied the same map twice because they look that similar. But they are indeed two different maps, snapshots of two different moments in time, just before the COVID crisis, and after the market recovery. They look so similar because the valuations were quite similar. Global valuations have made an almost perfect roundtrip since the beginning of the crisis. There and back again.