The Next Crises: Debt and Debasement

We're getting a little tired of using the word "unprecedented," but no other word captures the recent trends in both deficit spending and money supply expansion. Also unprecedented are the stratospheric prices for cryptocurrencies. And there are good reasons to believe that these violations of precedence are not merely coincidental, but rather logically related to one another.

To see how, let's start with debt. The following chart represents our national public debt in dollars (purple line, and units are the scale on the left of the chart) and then that same debt expressed as a percent of GDP (light blue line, and units are on the scale on the right of the chart). The bottom axis is time, starting in 1966 and proceeding to the latest update on the St. Louis Fed website as of this writing.

What we see is that not only has debt risen a great deal since the mid-1960s, but also that debt levels have taken an exponential upturn recently. Now, of course, debt sustainability is relative to wealth creation too. If someone has $200,000 in debt, are they in trouble? If they make $500,000 per year, probably not. If they make $10,000 dollars a year, they are in a much worse position.

So we are comparing the national debt to the national economic output, or at least the most popular aggregate for national economic output for now. In other words, we are comparing debt to a particular measure of income. But doing that, 'normalizing' debt according to wealth production, offers no reassurances. In fact, looking at the upper right section of the chart, you can see that debt as percent of GDP spiked almost straight up during the recent COVID crisis. Although it has dropped a tiny bit in the last month, it is still roughly twice as high as it was before the Great Recession.

If we zoom in on the right side of the chart, we can see all of that more clearly. And we can also see that from the beginning of 2020 to the most recent data, debt as percent of GDP grew faster than debt: 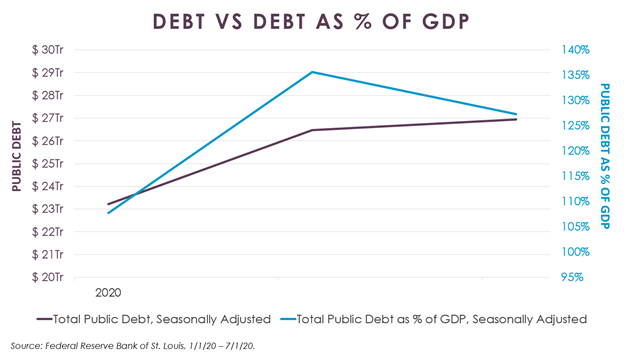 This makes perfect mathematical sense when you realize that GDP is in the denominator. So, if GDP goes down a lot (like it did during the worst of the COVID crisis), then even if debt stayed the same, the ratio of debt-to-GDP would have gone up a lot. But debt didn't stay the same, it increased dramatically. So the numerator went up,  and the denominator went down - two things making debt-to-GDP ratio worse.

So, where did we get that almost $4 trillion in money we borrowed? Did we get it all from money savers? Not really. Of course, many Americans put their savings into Treasuries as did many foreign investors, but a substantial amount of the money lent to the U.S. government came from another part of the U.S. government, the Fed. Technically the Fed is not entirely part of the government. It is quasi-public, meaning privately owned but under Congressional supervision, and with key appointments being made by the President. The Fed has the legal authority to create accounting entries on the books of member banks, which are then used to buy various assets, but mainly Treasuries. This is called 'debt monetization' which is a technical-sounding term for the idea that money is 'created' and then injected into debt markets. Traditionally that referred to short-term, usually just overnight, banking transactions. But with the Great Recession there was a shift towards buying Treasury bonds under various programs which are generally known as Quantitative Easing. 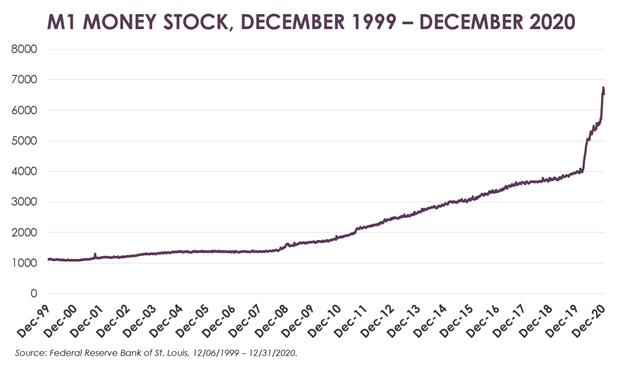 Is it any surprise then that gold, a traditional haven against currency debasement, also spiked upwards? 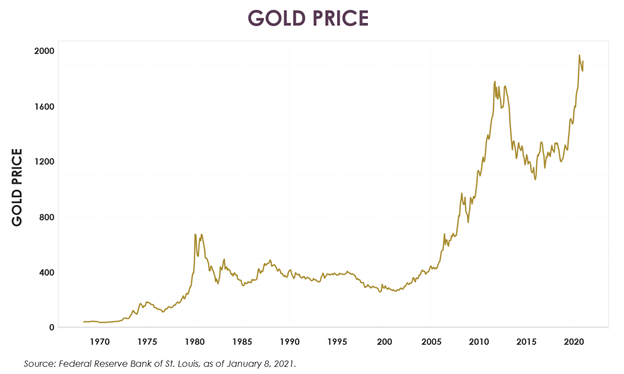 Is it any surprise that non-traditional 'assets', such as Bitcoin and Ethereum, also spiked upwards? Interestingly, Bitcoin went up in value so dramatically that if you put Bitcoin and gold on the same chart in the same units, the gold which we see spiking so much up above looks relatively flat by comparison below.

This is not a recommendation to invest in Bitcoin or gold, nor a recommendation not to. It is a recognition that these investments, both of which are thought of as alternatives to paper currencies such as the dollar, are sending out a warning signal which we believe not coincidentally coincides with, yes, unprecedented increases in debt and in money supply.