We've been looking at the nature of the COVID recession and the bounce back recovery, and we suggested that there were inflationary forces at play. When demand rises faster than supply and inventory has trouble keeping pace with consumer demand, that is inherently inflationary. Customers "bid" against one another for an artificially limited number of items.

So, is inflation coming? Has it already come?

No matter what central bankers and their friends in the press say, the general public seems to think so. 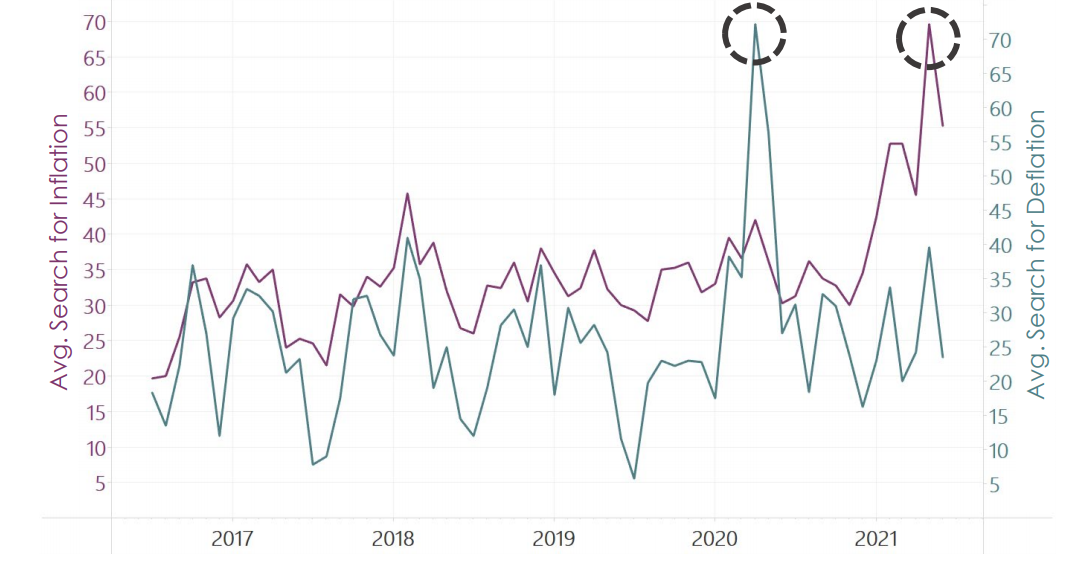 It shows that in the spring of 2020 there was a large spike in searches for the term "deflation." Deflation is not nearly as common a word, or idea, as inflation -- probably because, in general, prices of consumer goods go up, not down. Nevertheless, searchers became very curious about deflation last fall, and as we shall see below, they were right to be.

Then we see a spike in searches for "inflation" earlier in 2021, with a major spike in spring. But even after that spike, the traffic remained elevated as of the time of this analysis. So, the public moved from being focused on deflation to being focused on inflation. Public sentiment, also known as "inflation expectation," is a potentially important factor because expectations of inflation can actually affect inflation. The basic logic is that when you expect the price of some good or service to go down, and it is an optional purchase, you are more likely to wait until the price falls. If you expect the price to rise, you are more likely to go and buy it now before the price rises. But a rush of consumers buying something now, means that they may bid the price of that thing up. The expectation of inflation, in this thought experiment, actually helps cause inflation.

Polling also indicates grave concerns about inflation. According to the Investor's Business Daily/TIPP Poll from July 2021, "Nearly four out of five Americans in the Investor's Business Daily/TIPP Poll completed early July are concerned about inflation. The fears are justified, given that the price of gasoline at the pump has increased by 45 percent in the last year, used car prices by 45 percent, airline fares by 25 percent, and auto insurance by 11 percent.

Here's a pie chart of the responses: 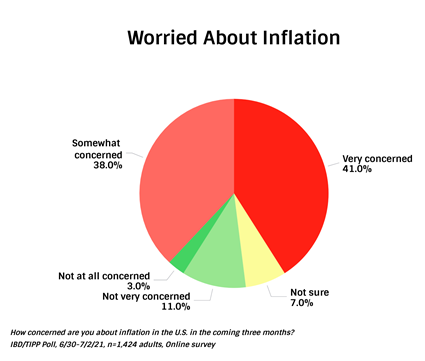 If one believes that investors keep better track of economic conditions than non-investors, then this would imply a more heightened risk than just looking at the general population would.

Such concerns seem to be matched by reality. Below is the change in the Consumer Price Index over one year. This is a metric very commonly used to track inflation and is widely reported. In this case it shows the highest yearly inflation increase since 2008 when the Fed was frenetically creating new ways to pump money into the economy which was falling into a deep recession.

But is this the right metric to use? The government also calculates something called "core inflation" which leaves out food and energy prices, because of their volatility. Apart from the fact that food and energy are essentials and that increases in those prices does seem relevant to any reasonable measure of price increases, we'll indulge the core inflation folks and look at that as well:

It's easy to see at a glance that core is less volatile, the gray line clearly moves around less than the purple line. But over at the far right, as of June (the most recently available data as of this analysis), the spike in prices is still undeniable. Even blinding ourselves to the obvious spikes in prices at the grocery store and at the pump, we still see a large increase in inflation this year.