Well, despite scary headlines, the actual prices themselves didn't go negative, but there certainly was a major drop in the value of oil. Markets often get the direction of the economy right, but they also can go too far.

So when prices are rising into bubble territory, it can signal growth, but sometimes they can go too far. And the contrary can happen during panics. Oil prices were right in signaling a downturn, but, in light of subsequent events, they arguably went too far down.

Just as we did with copper, another industrial commodity, we made some adjustments to account for changes in oil prices to account for inflation, deflation, and supply disruptions. Accounting for supply disruptions is probably more important for oil than for copper because oil comes out of some of the most unstable countries in the world. Someone in a rubber boat can throw a hand grenade at a boat in the Straits of Hormuz and it could potentially move oil prices. Middle eastern wars are, unfortunately, not rare, and they can definitely move markets.

When we adjust for inflation and supply and put this adjusted oil price on a graph along with the following year's growth, we see that something appears to be going on: 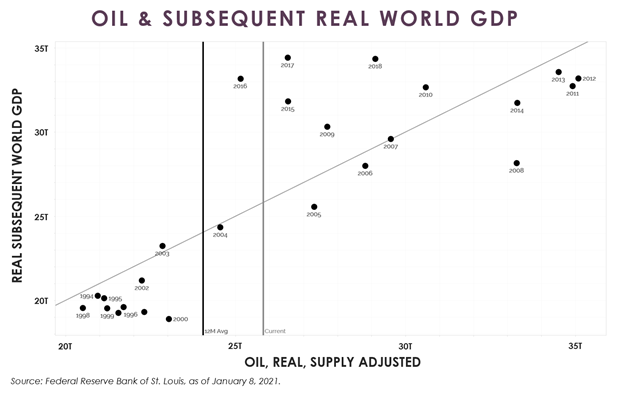 There is a cluster in the lower left and in the upper right, which is pretty much what a positive correlation means. The upward-sloping line simply shows that relationship based on a single equation. But the fit is clearly not as good as, say, the copper chart we showed in a previous report.

So, why pay attention if the fit is not as reliable as other factors like copper prices? First, because in a multitude of counselors there is safety. Second, because the past year has not been about the middle east, which has, at least by historical standards, been relatively calm. Oil didn't collapse in April 2020 because someone suddenly discovered a massive new well. It fell because buyers bet that the world would shut down, and although it didn't shut down entirely, something definitely happened. And it didn't rise because a hurricane hit New Orleans or a bomb hit Saudi Arabia. It rose because the economic contraction was short-lived and reversed quickly. If there had been some shift in the geopolitics affecting oil markets, we would tend to be less interested in the oil price signal.

So, once again, markets got the direction right, but went too far. Not an unusual story. The oil story is that the world will probably grow this year, but the oil story is not as optimistic as the copper story.