According to a prominent real estate broker firm:

Now, this kind of freeze in the market is understandable given a state-wide lockdown. But there is concern that we might be seeing a more permanent shift in buyer behavior.

"One of the looming questions heading into the third quarter is how the pandemic will shift buyer preferences. There has been a spike in search traffic for apartments with outdoor spaces and home offices, said Rory Golod, the regional president of the brokerage Compass.

“People are more attracted to a property that no one has ever lived in before,” said Steve Kliegerman, the president of Brown Harris Stevens Development Marketing, adding that the shift could be a boon for the new development market."

Even when (if) things unfreeze and even when (if) consumer preference once again become comfortable with big box apartment dwelling with previous tenants and elevators and all of that, there's still the question of taxes:

"The market may return to some semblance of normal by the first quarter of 2021...But that will depend not only on whether the city experiences another wave of infections, but also on whether the state decides to raise income taxes to shore up pandemic-related budget shortfalls."

I don't claim to know the future, but it doesn't seem like a solid bet given the political environment in New York state and city that the bill for an extended shut-down and a massive spending effort on public health will not be shifted onto taxpayers, particularly the type of taxpayers who provide the revenue base for high end New York Residential Commercial Property.

And yet, that's the kind of bet that the standard cap-weighted approach is making whether it is stated explicitly or not. 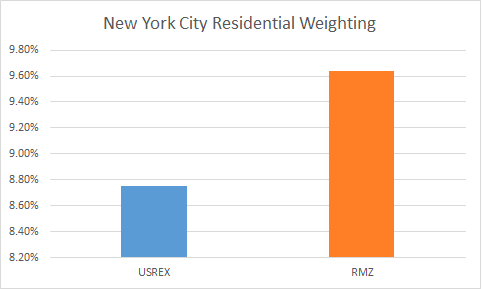 The Bureau of Economic Analysis Shows a somewhat flat income growth curve in New York, especially in the last year for which full data was available,  2018:

Per Capita Income as a Percent of the United States

And although New York's residents' income over a decade grew slightly faster than the U.S. average…

That fell to below average in the last year for which data is available (which predates the current crisis):

New York is a great city, perhaps the greatest in the world. But it's hard to justify putting so very many eggs in this one basket given trends in place before the crisis, which seem to be accelerating in reaction to it.