But there's good news. The Philadelphia Fed tracks what it calls 'Coincident Indexes' on all 50 states which are based on a mix of economic factors called Coincident Indicators. Investopedia has a useful introduction to the concept of coincident indicators:

This data is much fresher than GDP because using metrics which coincide with growth rather than ones which look back several months allows, in this case, a metric to be released in August which covers a three month period which ends at the end of July. So, it covers three months, like GDP, but is one month more up to date.

This recent release shows us what happened May - July. Why is this particularly important now? Because as we saw previously the vast majority of the bad news was over with by May. So the coincident indicators shows us the three months after the worst of the global and economic crisis.

It shows us solid growth for the U.S. overall, and it shows that this growth occurred in most of the states, not concentrated in a few.

"Over the past three months, the indexes increased in 45 states and decreased in five states, for a three-month diffusion index of 80. Additionally, in the past month, the indexes increased in 37 states, decreased in 11 states, and remained stable in two, for a one-month diffusion index of 52. For comparison purposes, the Philadelphia Fed has also developed a similar coincident index for the entire United States. The Philadelphia Fed’s U.S. index increased 5.4 percent over the past three months and 0.8 percent in July. " 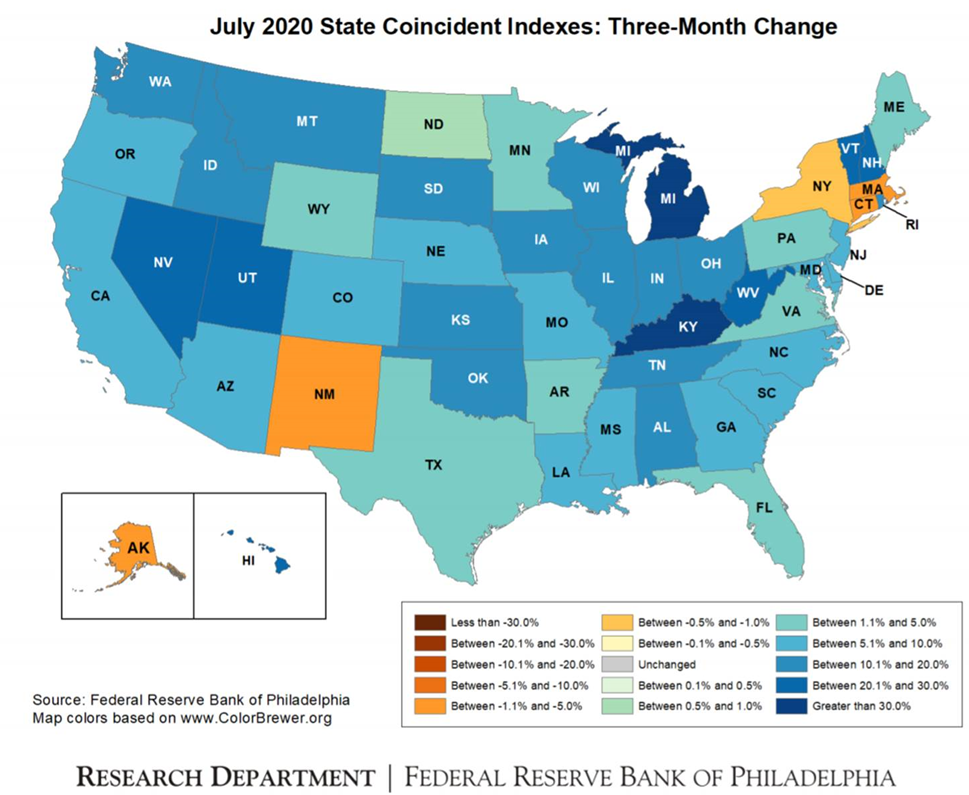 Michigan has been booming, showing up in the 30% or higher growth category! This is consistent with what we've seen in some of our recent analyses about a sharp increase in durable goods manufacturing piece. This may well have implications for the Presidential election.

Speaking of which, Ohio is in the 5-10% growth category, and so is Wisconsin. Florida and Pennsylvania, however, are in a slower 1-5% growth range. In general, 'swing states' are doing better than the national average, but not consistently.

So the bottom line is that the past three months, a window which does not include the disastrous collapse of March/April, have shown a boom, and that boom is widespread and somewhat trends towards swing states. But that boom lost a bit of momentum last month.