Large vs. Small, Cheap vs. Expensive: Which Stocks Indices Did Best in Other High Inflation Times?

There are lots of ways to classify stocks in various indices, but two of the most common ways to classify them are according to size; and style, which often means either expensive (growth), or cheap (value).

Let's start with size. It matters. Size refers to what a company is worth when you add up the price of all the outstanding stocks. That's called capital size or cap-size. Generally, they come in three varieties: Large Cap, Mid Cap, and Small Cap. There is a Micro Cap, but it's a niche market, and a bit of a scary neighborhood most investors stay away from, and there are few indices which reliably represent it. 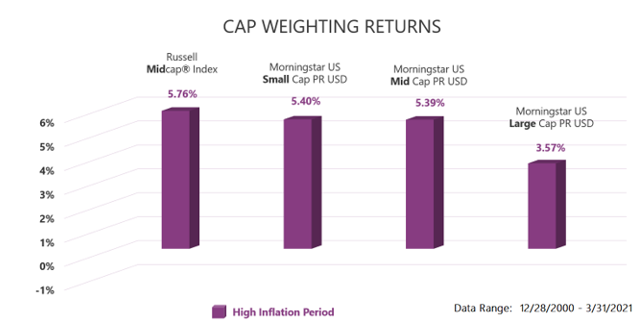 In this sampling of indices, the best average performer during high inflation quarters was a Mid Cap index. A different Mid Cap index was almost tied for second. And the worst was Large Cap. The general pattern appears to give a slight edge to Mid over Small, and a pretty substantial edge to Mid over Large.

But sometimes inflation is low. By definition, there are the same number of periods in the top fifth as there are in the bottom fifth, and we don't know what the future holds, so we'd be wise to add low inflation (represented by the gray bars below) to the picture: 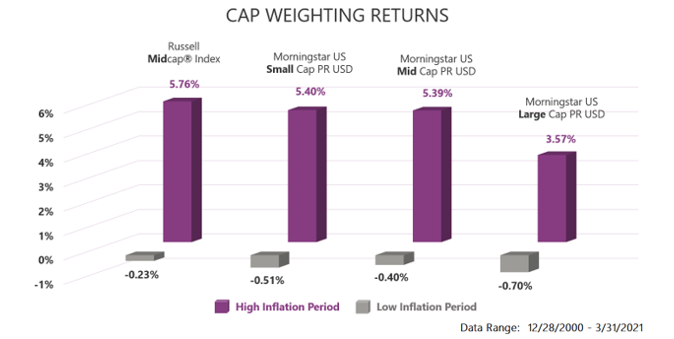 All the size buckets performed much worse during the lowest inflation quintile, all four of them registering a negative average return (though the silver lining is that when inflation is lower, it takes lower returns to beat the inflation level and grow wealth faster than rising prices).

Looking at these indices and past inflation, Large Cap and high inflation wasn’t the best mix. Mid seemed closer to just right.