How Great is Great Britain?

Should roughly 1/10th of your international investment be in a country that represents only 2% of global GDP?

As of January 31st, 2020, that was the bet that was made by a cap-weighted approach about the United Kingdom. By contrast, VIEQX, our international investment index, had a weighting roughly half that (out of a universe of 39 countries) in the U.K. at the same time.

The overweight allotted by a cap-weighted index is an example of the “cap-weighting as past-weighting” phenomenon: Cap-weighting allocates investment based on the current value of a country’s domestic stock market, and that value itself is essentially the sum of all their past losses and gains over decades, or even centuries. That means that cap-weighting tends to be past-oriented, not future-oriented, which is why it would be predisposed to overweight a country like the U.K. – one that used to be the financial center of the world and one of its top economies. A history of high returns decades ago does not necessarily indicate a future of high returns, but a cap-weighted approach implicitly adopts that perspective.

While we did underweight the United Kingdom relative to the past-oriented cap-weighting approach, that does not mean we think that there is no potential for return there, or that they should be excluded from an international investment fund. They are our 10th highest weighting, which means we think there is substantial opportunity for return on investment from the United Kingdom. From an investing perspective, there are several attractive features of the U.K. economy – but there are also some unattractive features, ones which we think mean, although they do deserve a significant weighting, they do not deserve the high over-weighting that a cap-weighted fund allots them.

In our Country Opportunity Score, which measures the overall potential for return on investment within a country, the United Kingdom ranked fairly high, at 10th out of 39 countries. In the resiliency category, which tracks a country’s ability to withstand economic shocks, they also had a good score. The same is true for short-term opportunities, which is our aggregate valuation score. Where they start to fall off is in the long-term opportunities category, which measures policy changes in the form of labor market freedom, entrepreneurial freedom, trade freedom, and monetary manipulation by the central bank. The U.K. ranked 25th out of 39 countries in this category. They had particularly bad scores in 2-year change in effective trade tariffs, which indicated a worsening trade environment, and 1-year change in the cost of starting a business, which indicated a worsening entrepreneurial environment.

They also have demographic issues; while their population growth was above average for the countries we tracked, they had below average old age dependency, meaning a larger proportion of their population is elderly.

As you can see in the chart below, the U.K. has a particularly arduous fiscal situation. 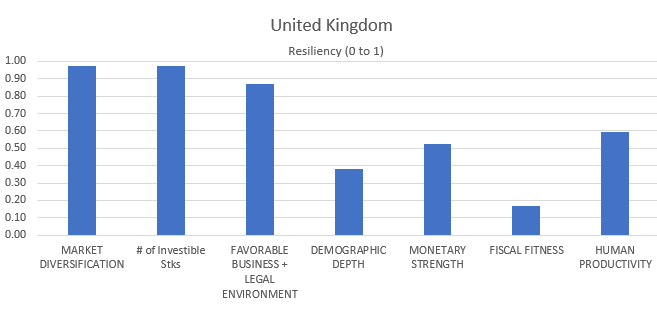 The U.K. ranked near the bottom of our list at 36th for Fiscal Fitness (second column from the right above), which tracks a country’s overall fiscal situation, such as their national debt ratio and annual budget deficit. This is part of our Resiliency category and implies a relatively high degree of susceptibility to fiscal shocks. Their debt-to-GDP ratio was high, at 80.7% in 2019, and they were at the bottom of the list for Savings as a Percentage of GDP, and near the bottom for Total Investment as a Percentage of GDP.

In addition to long-term economic issues, they also suffered from the recent pandemic and accompanying shutdowns. Their economy shrank by -20.4% in Q2 of 2020, their largest decline on record, and that was after a -2% decline in Q1 2020.

Is all this to say that an international investment fund should have no money in the United Kingdom? No, as we had a 4.57% weighting there as of January 31st, 2020, which is quite substantial. But putting nearly 10% in the country, as a cap-weighted fund does, implicitly suggests that nearly 10% of future returns will be found in their domestic stock index. Even before the recent economic crisis, the U.K. was not boasting high growth rates. They have not exceeded a 5% annual GDP growth rate since the 1970s.

There are numerous positive features of the U.K.’s economy, such as its respect for the rule of law, low corruption, and free business environment, which is why it’s in our top ten. But a cap-weighted approach puts nearly double the weighting we do in the U.K., because their approach values past greatness. We think weightings should reflect how an economy is performing today and how it is expected to perform in the future, not the accumulation of its value over the course of decades.

As it stands today, from an investing standpoint, we would consider it Pretty Good Britain, but not Great Britain.