How Companies Pay Shareholders: What Do the Data Say?

We took an independent look at the data to see whether buybacks were additive to return or not. The answer seems to be “sometimes.” Which then raises the question, “When?”

First, let’s talk about how we approached the problem. We started with an equal weighted portfolio of a wide variety of companies -- all the companies in the universe for which we had available return data. We excluded extreme outlier returns and very small companies.

Then we divided that portfolio into buckets. One bucket was made up of companies which, during the particular year in question, began the year with more shares in circulation than it had at the end of the year. In other words, Net Equity Issuance was less than zero. These companies concentrated ownership rather than diluting it. The other bucket was made up of all the other companies. Concentration occurred in roughly 1/5th of the cases. The other 4/5ths were either no change or dilution -- mostly dilution.

When we looked at the whole universe together, we found that the companies which bought back their shares (whatever method was used) slightly underperformed (by about 1%) on average in the subsequent calendar year compared to those which did not buy back their shares. 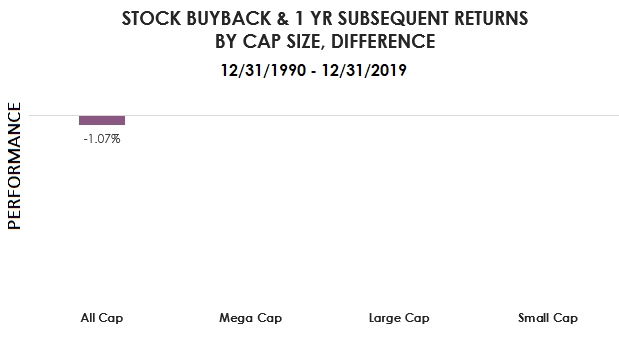 Does that mean buybacks don’t work? Not really. It just means that they don’t always work. It seems like the performance additive nature of buybacks is somewhat dependent on the size of the companies.

For example, let’s look at “Mega-Cap” companies, the top 100 largest companies in any given year based on market cap. This is an example of a worst-case scenario for buybacks, with severe underperformance in the subsequent calendar year of those who take shares off the market, in comparison with those who don’t. 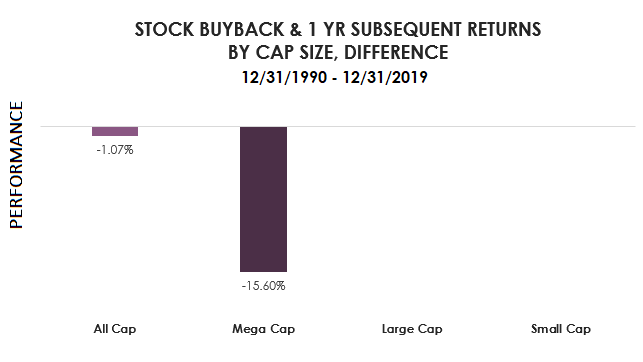 That’s a whopping 15% underperformance. This might be surprising to people since mega caps are known in recent times to have been engaging in share buybacks and also have been an overperformer in recent years. But that’s not necessarily the case historically. Often, smaller companies have outperformed. In addition, this method is not comparing the Mega cap bucket to other cap sizes. It is comparing companies which do buybacks to companies which do not do buybacks within the Mega cap bucket, which is a different matter. In other words, it asks the question, “If you looked only at the 100 largest companies, and then compared the returns in the subsequent year of those who had purchased back their own stocks, with the returns of those of the 100 largest companies which did not buy back their own stocks, what would be the difference in the average subsequent calendar year returns?” Answer: about 15% to the disadvantage of the companies which took shares off the market. Ouch.

What about Large as opposed to Mega? Here we define large as the top 500 rather than the top 100. That improves things a bit. The buyback factor still underperformed (i.e., those which take shares off the market average lower returns than those which don’t), but by a significantly lower margin.

In this case, we’re looking at roughly a 5.6% underperformance in the calendar year after the buyback. Remember that we’re not comparing large cap to the rest of the stock universe: we’re comparing large caps which reduce shares, concentrating ownership, to those which do not.So, when does share concentration work? By “when,” we mean in which category of companies sorted by size, not “when” in the sense of which market seasons (which is a different question). Answer: when the companies are small cap. 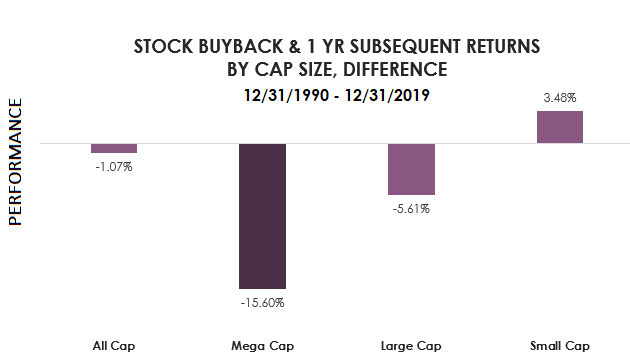 Here we can see the buyback/share concentration effect working to advantage, which is to say: The instances when small cap companies engage in that process outperform instances when companies do not by almost 3.5%.

This analysis may seem like it puts buybacks in a poor light, but small cap companies are much more numerous than large or mega, which, by definition, include only the top 500 or top 100 respectively.

So, the story is a mixed one, at least in our analysis.

This raises some interesting questions. Is the issue mainly whether companies concentrate shares or not? Or does it matter how much concentration or dilution there is? We’ll take a look at that a bit later.

But next we’ll ask: Are buybacks the best way to measure the concept of companies sharing profits with owners? Companies have other ways to pay their shareholders, for example: dividends. Relying exclusively on buybacks isolates only one form of payout of profits against another, more widely accepted one. Isn’t the point to see whether companies put their owners interests ahead of internal empire building? If so, perhaps there is another way to do that.