Is there a metric or series of metrics which captures the best of what we learn from looking at the buybacks factor, but avoids some of its shortcomings?

Net Payout of Profits just might fit the bill. This metric looks at the percent of profit which is distributed versus the percent of profit which is kept. Don’t misunderstand – I’m not referring to money reinvested – I’m referring to profit after reinvestment. Companies can distribute profit, or “save” it. A Net Profit Payout of 100% means the company “gave” (but remember, it’s not a giveaway, the shareholders bought the right to receive these distributions when they bought the shares) all of its profits to its owners that year.

The data look good. Using a method which divides the data into quintiles (fifths), the top (first) being the highest payout percentage and the bottom (fifth) being the lowest payout, we see that the top two tended to outperform the bottom two in the subsequent calendar year. 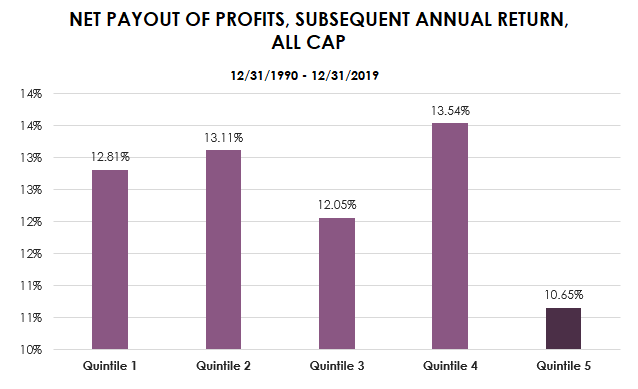 One of the things which also stands out about the payout ratio is that it works across all the size buckets we looked at: Mega, Large, Mid Cap, and Small Caps, which show overperformance of 2%, 2%, 1% and 7% (!) respectively. Throwing all those cap buckets into one All Cap bucket (everything above 1 billion dollars in valuation), we got a 1% overperformance in the subsequent year.

Historically, this factor positively correlated with subsequent annual performance 80% of the time in the data we looked at.

There are various reasons why this might be the case, but the one that comes to mind most easily is a point made by Warren Buffett who looks for what he calls an “owner orientation” in the companies in which he invests. Human nature is such that CEOs might fall into the temptation of empire building with someone else’s money. But a company which pays out a large share of its earnings is showing that it probably does not have an empire building tendency, otherwise the money would be hoarded. On the other hand, as Alex Edmans has argued in his book Grow the Pie, companies should not always distribute cash – there may be good reasons to reinvest, but only when there are good reasons to reinvest, is it in the investors interest that the company keep the money. When the company no longer has high impact investments to make inside, it should give the money back to the investors so they can redeploy it where it can have a high impact. Distributing the income puts that decision in the investors’ hands. After all, if the payout is in the form of a buyback, investors don’t have to accept the offer, they can keep the stock, and if the payout comes in the form of a dividend, the investor is perfectly able to take their dividend and turn around and buy more shares.