In our ongoing series about stock selection which has first focused on how companies pay their shareholders, we're going to take a slightly deeper dive into buybacks.

Reminder: We are referring to situations in which a company reduces the number of shares in circulation by repurchasing them in some way, thus leaving the remaining shareholders with more concentrated ownership in the underlying assets of the company.

For a theoretical example, if a company buys back half the circulating shares, that means that the remaining shareholders own twice as much of the company. Think of a small business with ten equal partners. The business buys the shares of five of them. Before that, each partner owned 1/10th of the company. Now the remaining partners own 1/5th of the company. In financial parlance, this is called 'concentration'. When things go in the opposite direction -- more shareholders, more 'partners' (in the general sense, not necessarily the legal definition) -- then a smaller share is owned by each.

First let’s look at the metric Return On Invested Capital, or ROIC. Here’s how Investopedia defines it:

You can see below that companies which have high rates of ROIC tended to be much more likely to do buybacks/concentration. The top quintile (meaning the top 1/5th of instances in which companies in our universe have a reported ROIC) had an average of 52% of instances of ownership concentration.

The bottom quintile of ROIC, meaning the worst 1/5th, only show an average of 22% of ownership concentration instances.

This makes sense. Companies with high returns tended to be more likely to be able to afford to buy shares back. Companies that are struggling with cash flow issues had trouble finding the cash to disburse to their shareholders. Buybacks/concentration seem to be flowing out of growing pies, not financial austerity turnip-squeezings. 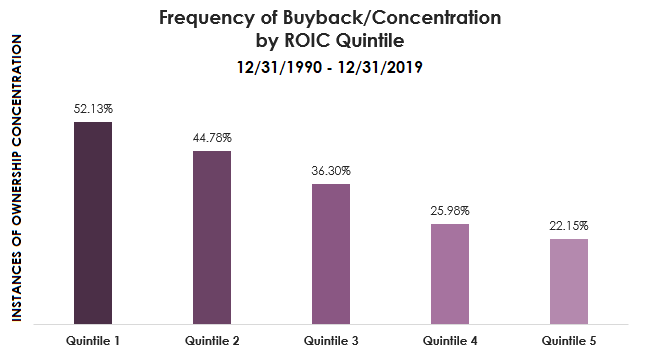 Let's look at a similar metric: Gross Profits as a Percentage of Assets. Here’s how Investopedia defines Gross Profit: 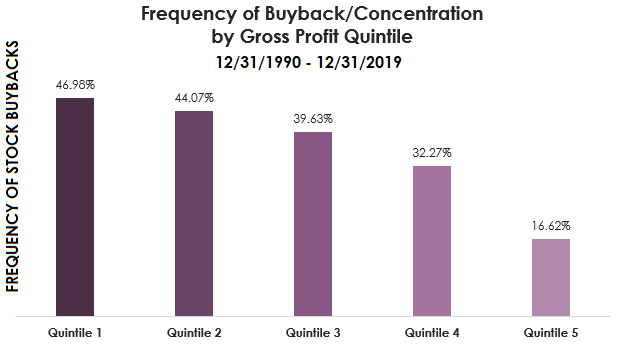 We see a similar picture. The higher the profit return on assets -- i.e., the better the company is at using its assets to create this specific broad definition of profit -- the more likely they were to reward their owners by offering to buy back their shares. When a company buys back its shares, it is betting on itself. This happens much more often when companies are good at turning assets into profit.

The top quintile, the best 1/5th of instances of this factor, engage in buybacks or otherwise concentrate their stock 47% of the time. The bottom quintile, in which companies are particularly bad at turning a profit and are instead predominately producing losses, only engaged in buybacks/concentration 24% of the time. Those companies were much less likely to bet on themselves and by definition had less profit to do so even if they wanted to.

Here's a nice overview of some metrics that have to do with earnings quality, such as the two we saw above, and whether they tend to coincide with buybacks/concentration in the same calendar year. 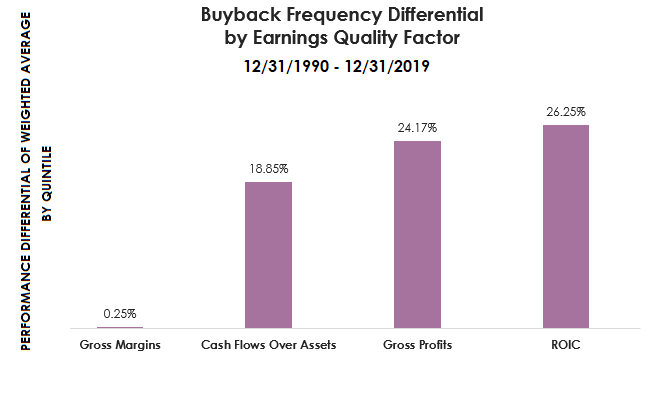