As part of our ongoing series on Stock Selection, today we’re looking at the question of valuation. London Business School Professor Alex Edmans has suggested that companies can use a buyback mechanism to purchase undervalued shares, thus supporting share prices (and helping investors) at times when the market is not valuing the company properly. In this case, the company acts as its own value investor.

This explanation is generally consistent with the data we looked at. For example, let's look at two valuation metrics which are quite broad and generally accepted. Firstly, Earnings Before Interest, Taxes, Depreciation and Amortization, or EBITDA. Here's Investopedia's definition:

"EBITDA, or earnings before interest, taxes, depreciation, and amortization, is a measure of a company's overall financial performance. [...] EBITDA is a good measure of core profit trends because it eliminates some extraneous factors and allows a more "apples-to-apples" comparisons."

Now let's look at EBITDA as a percentage of its EV. That sounds kind of complex, but it's really more of a simplification. It presents earnings but doesn't include the expenses that fall under ITDA, which tend to be based on complex accounting estimates instead of actual cash expenditures. And the EV part takes into account not only the value that the market places on company stocks, but also on company bonds. 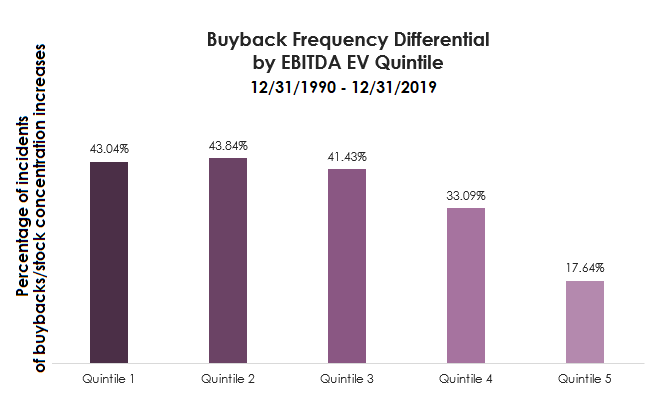 The first quintile shown above is a bucket of the top 1/5th of data points in terms of attractiveness of valuation of a particular company in a particular calendar year. Each bucket shows us in how many of those instances the companies concentrated stock ownership. In that top valuation quintile, it happened 43% of the time. In the bottom valuation quintile, it happened 18% of the time.

So, repurchasing tended to be associated with attractive valuations. This doesn't prove the point that companies buy because their stocks are on sale. There are other issues. For example, the exact timing (for which data was not available at the time of this analysis). The valuations are at the end of the year, whereas the buybacks/concentration are during that same year, so more analysis is needed to make sure that the causation is in the right direction. But the basic logic makes sense – companies had good reason to buy back what was on sale. And the basic logic of the counter-argument does not make sense -- all other things being equal, buybacks/concentration would not tend to make companies more attractively valued, since buybacks/concentration by their nature would boost stock prices. So, on the surface it is likely that the bargain pricing causes the buyback, not that the buyback causes the bargain pricing.

Here's a nice overview of several other valuation factors, including the one we just looked at: 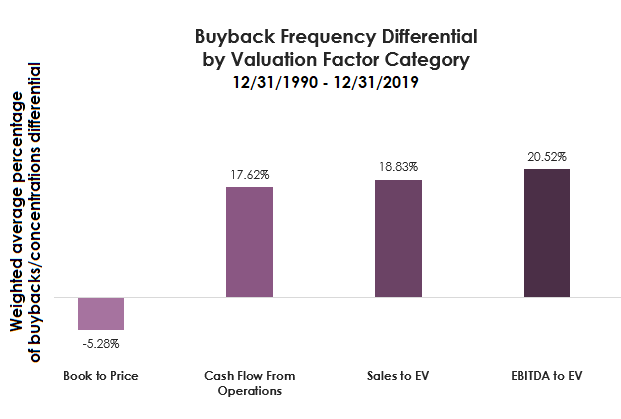 In general, it looks like companies tended to buyback when they were on sale. The only exception is the factor Book to Price, which compares the formal accounting statement’s value of the company to its market price. The Book-to-Price factor is just a flipped version of the more commonly-used Price-to-Book Ratio. Here’s how Investopedia describes that:

"Companies use the price-to-book ratio (P/B ratio) to compare a firm's market capitalization to its book value. It's calculated by dividing the company's stock price per share by its book value per share (BVPS). [...] Book value is also the tangible net asset value of a company calculated as total assets minus intangible assets (.e.g. patents, goodwill) and liabilities. [...] Some people may know this ratio by its less common name, the price-equity ratio."

This definition of value is subject to a great deal of discretion both by managers and by regulators' rulemaking powers in the use of estimating assets and liabilities. It's far from actual cash-on-the-barrelhead-type metrics.

"Cash flow from operating activities (CFO) indicates the amount of money a company brings in from its ongoing, regular business activities, such as manufacturing and selling goods or providing a service to customers." 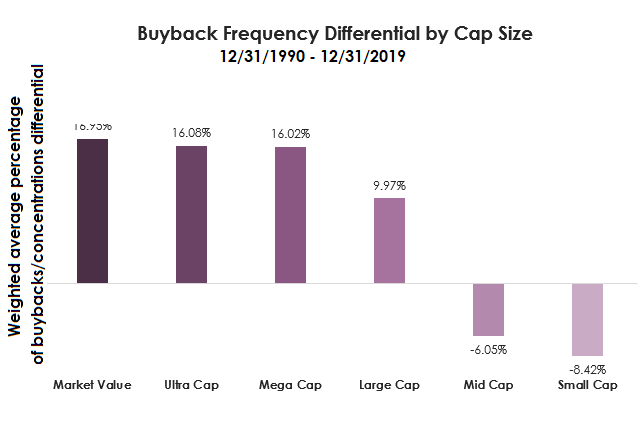 The first metric is created by taking the aggregate stock market value (market cap) of the companies in the universe and dividing them into 5 buckets. The top two buckets represent the largest 2/5ths of the companies. The bottom two represent the smallest 2/5ths. This metric calculates the difference in frequency of buybacks/concentration between those relatively large company buckets and relatively small company buckets.

The other bars show a simpler relationship. Ultra cap is the top ten companies in any given year; Mega is the top 100; Large is the top 500; Mid is the next third after large is taken out; and Small is the rest (with a lower limit to leave out extremely small companies such as ‘penny stocks’). The differential is the average percent of companies which engaged in buybacks/concentration in a given year and size bucket, minus the average percent not in that size bucket.

We believe that investors would be wise to take company size into account when it comes to looking at stock buybacks/concentration and other similar ways in which companies pay their owners.