Green Dot Investors in the Green

The recent strong performance of Green Dot is an illustration of the limits of focusing on gigantic mega-cap 'celebrity' companies such as Apple, Microsoft, Facebook, Google and the giant banking and energy companies.

Vident starts with a potential universe of roughly 3,000 companies before applying various filters and weightings. That approach proceeds from the premise that investors should not assume that only companies that are household names can be the best performers. Let's take the case of Green Dot.

According to the Wall Street Journal:

This puts it in the financial sector, but as fintech it is on the innovative edge of that sector.

It’s a great example of the benefits of a highly diversified approach which includes small- and mid-cap stocks instead of focusing exclusively on large and mega-cap stocks. At $2.8 bn as of this writing, it’s in the low range of mid-cap, which is usually defined as $2-10 bn in market cap.

It’s hardly a giant and hardly one of the big names in corporate life, which means it has relatively low weightings in portfolios based on the size of market cap. Green Dot was the second largest return contributor from January 31st, 2020 to July 31st , 2020, and the largest contributor based on an overweight to (as opposed to an underweight from) a cap-weighted approach. That's because VCUSX's principle reasoning approach allows the flexibility to diverge from automatic weightings based simply on the size of the company.

In this case, VCUSX's methodology was attracted by the earnings quality of Green Dot: 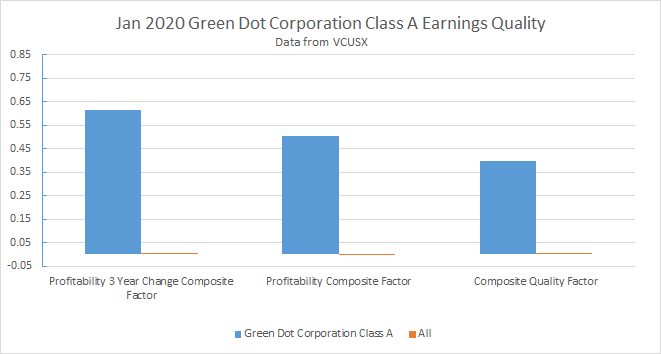 It stands far above average on profitability, profitability trend, and quality of revenues. The scale above is based on a scale from negative 1 to positive 1. "All" refers to the average of the VCUSX universe. 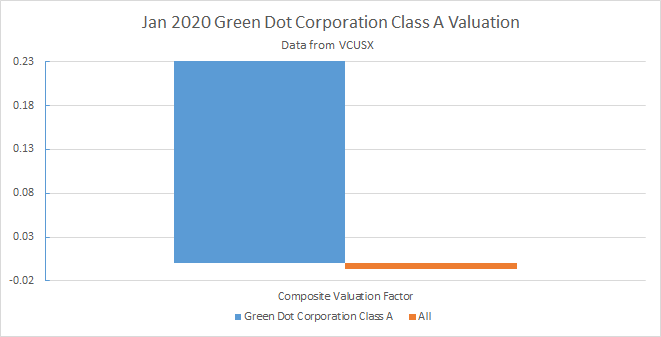 In this case, and as of this writing, that has been advantageous. As of this writing, Green Dot has returned 92% over the past year, easily outpacing the WSJ benchmark financial services index XX:WSJMXUSFCL, which returned slightly more that 24% during the same period.