GDP Bounced Back, Sort Of

GDP is the most popular general measure of economic output. It started its contraction in the first quarter of the year, rapidly accelerated its fall in the second quarter, and came roaring back in the third quarter. We don't have official fourth quarter results as of this writing, but it is likely to be another positive quarter.

If you look at the percent change in GDP per quarter below, it looks as though the economy has retracted, fallen, and then bounced back as much as it fell, putting things back to normal. 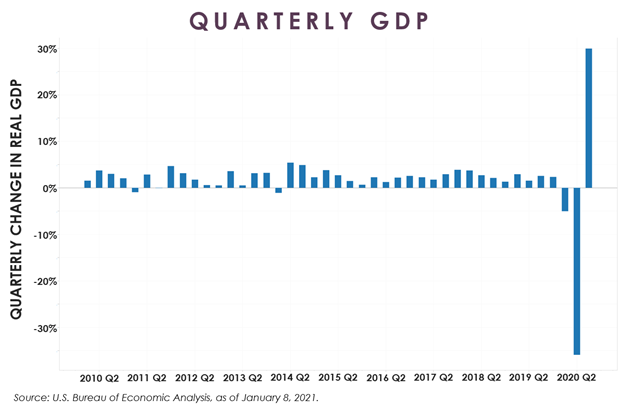 But that's not what really happened. Yes, the second quarter crash was a decline of about a third, and the third quarter recovery was an expansion of about a third, but those facts can be a bit misleading on the surface, because when an economy shrinks by a large degree, then the percentage change back upward is against a smaller base.

Let's look at a simple mathematical example. Not actual numbers, but round numbers to make things easy to see.

Those aren't the actual numbers, what happened last year is a bit smaller than that, but the principle is the same. A decline of a third and then an expansion of a third doesn't quite get you back to normal and so although the third quarter roared back and the fourth quarter is expected to be about the same percentage up as the first quarter was a percentage down (about 4%), the symmetry in percentage changes will not restore things to normal.

The same principle applies to percent change in profit, which we can see below:

Though, you can see that the percent change of recovery so far reported have not remotely been of the same order of magnitude as the decline. In other words, profits are far from being restored to normal… so far. But when the economy is reopened, revenues -- and along with them, profits -- are quite likely to surge.