Last year we wrote a lot about the history of Emerging Market (EM) overperformance. That historically it tends to overperform developed markets; that it does not always overperform; the conditions under which it does overperform.
First, the tendency towards overperformance: 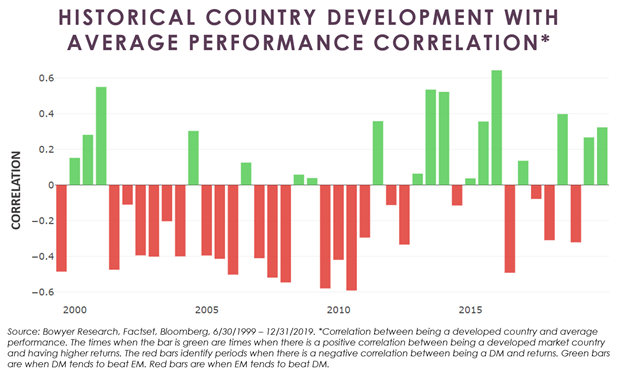 This chart shows periods when being a Developed Market (DM) positively correlated with performance in green. The red represents times when development status (i.e. being DM as opposed to EM) negatively correlated with performance. In short, the times the bar is green is when DM tended to do better than EM, and the times the bar is red is when DM tended to do worse than EM. There's more red than green, meaning most of the time, EM tended to do better.

But EM does not reliably overperform -- note that in the final four periods above, correlation between being DM and performance were positively correlated. This was a poor environment for EM in general.

Are there certain conditions which tend to precede or accompany EM overperformance? Yes, there are, and we discussed them in the briefing last year.

One important precondition is that EM tends to bounce back better after a global crash. 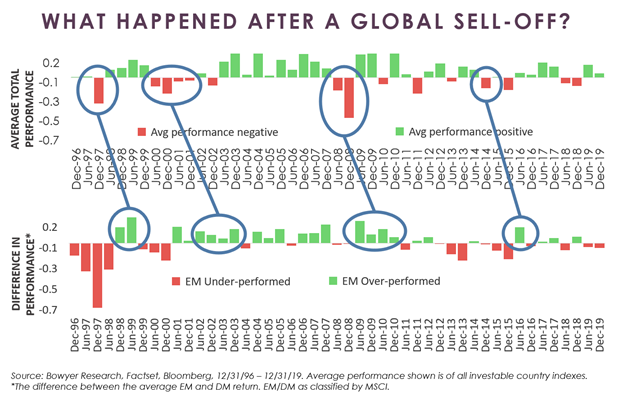 The top line bar chart shows overall performance of an equal weighted portfolio of national stock markets. It's a broad measure of global stock performance spread equally around the world. The bottom line bar chart shows EM overperformance compared to DM. Green bars are times when EM did better, and red when it did worse. You can see that EM was significantly more likely to outperform DM in periods after a global bear market. Note this visually by looking at the diagonal arrows.

We saw large global market sell-offs early in 2020 which implies that, if the historic pattern held, overperformance of EM was likely to follow. We will see below that EM did in fact overperform in coming out of this global crash.

The other conditions that we looked at in regards to conditions favoring EM are U.S. central bank interest rate policy. 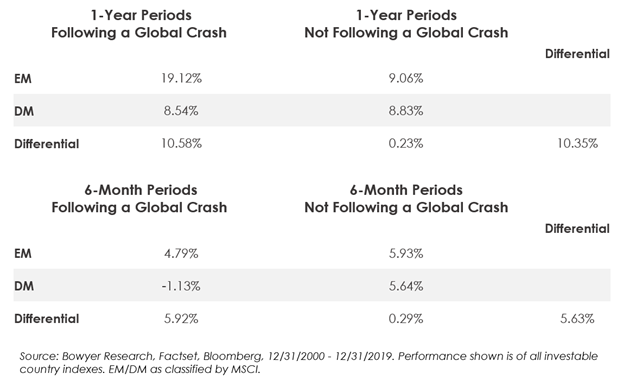 The data showed clearly that there was a very noticeable pattern which favored EM when the U.S. was not engaging in substantial rate hikes. Since rates were unlikely to be hiked as per very clear declarations from Fed Chairman Jerome Powell... 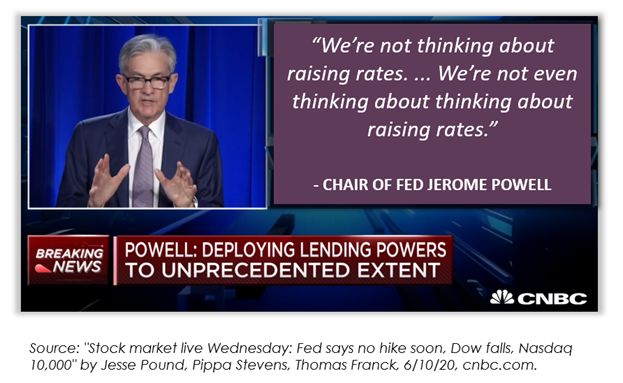 What this suggested was a second factor favoring a recovery that favored Emerging Markets. Here's what happened in the last quarter: 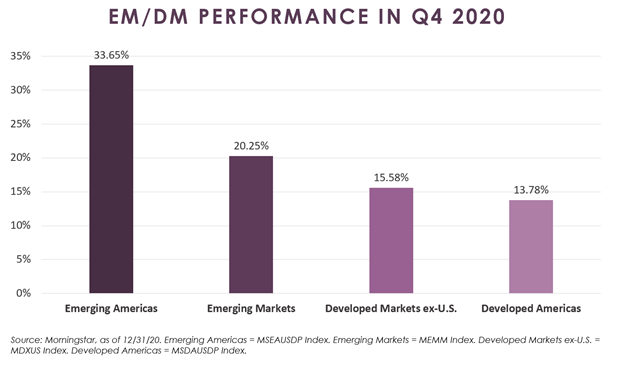 Portfolios that capitulated on EM and shifted to DM early in 2020 faced significant headwinds when it came to performance issues.