Mr. Market is an idea popularized by Warren Buffett, which he learned about from his mentor, Benjamin Graham.

“Used as an allegory, Mr. Market is an imaginary investor devised by Benjamin Graham and introduced in his 1949 book, The Intelligent Investor. In the book, Mr. Market is a hypothetical investor who is driven by panic, euphoria, and apathy (on any given day), and approaches his investing as a reaction to his mood, rather than through fundamental (or technical) analysis. Modern interpretations would describe Mr. Market as manic-depressive, randomly swinging from bouts of optimism to moods of pessimism.”

As you see, the idea Mr. Market focuses on when he is wrong, because according to Graham/Buffet and other value investors, that's how investors make money, by knowing when Mr. Market's bipolar disorder has mispriced stocks.

But the market is actually quite often right. When he's on his meds, and not hopped up on euphoria or down on panic, he's a pretty good forecaster. That idea is called "The Wisdom of Crowds."

As defined by Investopedia:

“Wisdom of crowds is the idea that large groups of people are collectively smarter than individual experts when it comes to problem-solving, decision-making, innovating, and predicting.”

So according to this idea, groups of people know more than individual experts. This especially makes sense when the members of the group have 'skin in the game', meaning that they will suffer real rewards or punishments for being right or wrong.

Are markets at all able to anticipate the economy? Are they usually Mr. Market with his mood swings, or are they usually Dr. Market, who is soberly analyzing the data and getting this more right than wrong? Let's look at some data.

First, let's look at the comparative valuation of bonds compared to stocks. Bonds compensate you by sending you interest payments, which are fixed in amount. That's why they are called "fixed income investments." The interest payments come out of the revenues of the company (or government) which issued the bonds, but unless low revenues force the issuer to default, the payments do not vary with earnings. Stocks, on the other hand, also pay out of the earnings of the company, but they do it either by paying shareholders dividends, or by paying shareholders to buy back their shares. Both forms of paying out income are set at the discretion of the company. They can change. Therefore, they're not fixed income.

So, since payments to bond holders generally do not vary with the economic prospects of the issuer, but payments to stockholders can vary, then when investors are worried about the future, it makes sense that they would buy bonds and lock in that fixed return, whereas if they are optimistic about future prospects, it makes sense that they would buy stocks and 'bet' on earnings to go up and to be paid out to them.

The chart below shows Equity Yield Premium (EYP), comparing the ratio of interest payments to price of bonds (specifically 10-year treasury bonds) to the ratio of company earnings-per-share to price-per-share of stocks. That is, it compares how much more investors want bonds than they want stocks, which is to say, it theoretically should reflect their lack of appetite for risk. 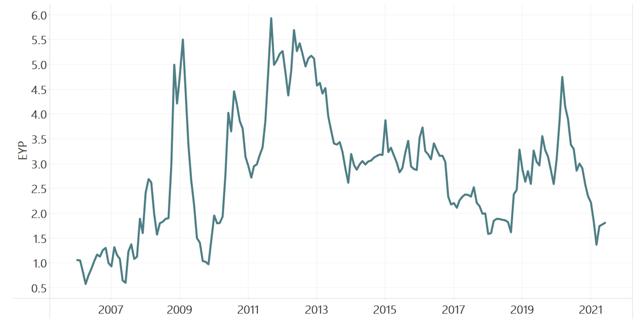 But does this really mean anything? Let's look at whether this fear metric actually correlates with the economy: 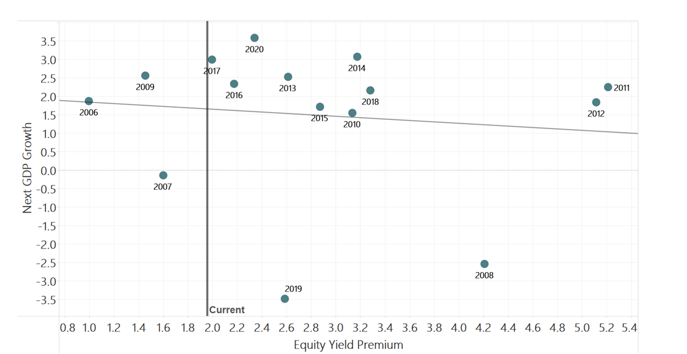 Let's get oriented: The metric on the right-to-left axis is a relatively smaller number when optimism is increasing, so on this chart, rightward is frightward. The up-and-down axis is subsequent U.S. GDP growth; so higher on the chart is relatively high growth, and lower is relatively low growth. The line across the chart represents the relationship between the two axes. First, the line is going in what we believe to be the 'right' direction in terms of the theory that markets can be right about the future. According to this data, market fear (as captured imperfectly by this one particular metric) negatively correlates with future growth. That’s what the downward sloping line indicates.

But is it a good fit? There really is no universally agreed upon definition of what a good fit means. But just a glance at the chart shows that is certainly is not perfect. When dots are above the line, the metric underestimated growth; when dots are below the chart, the metric overestimated it. It doesn't look like a great fit. But then again, we should cut Mr. Market some slack. No one knows the future. In this case, let's give him a master’s degree, and not confer an honorary doctorate. According to the data shown, Master Market, when it comes to stock market/treasury indicator, has some insight, but leaves something to be desired.

Let's look at a similar metric. This one compares investment grade corporate bonds to the same 10-year treasuries. Preference for treasures still causes the line to go up, but in this case, it’s preference for corporate bonds (not corporate stocks) which causes the line to go down. Why might this be a risk measurement? Well, it's not about varying the payout, both are fixed income. In this case, it's about the risk of default. The theory is that when economic conditions get bad enough, bankruptcies surge, and fewer companies actually make their agreed-upon interest payments. 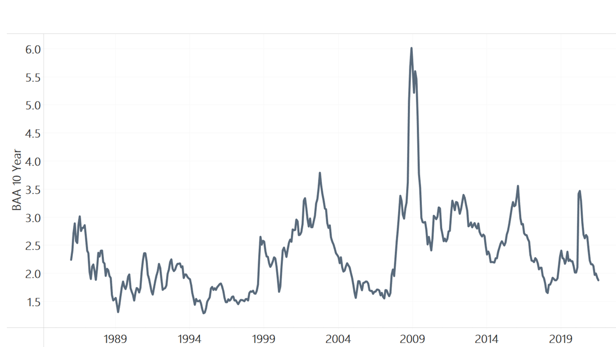 We see a lot of the same spikes and trough time periods as we saw with the line chart earlier: Great Recession, EURO Crisis, Tax Reform, COVID shutdowns, COVID reopening. The shape of these charts is not exactly the same, but there are clear similarities.

How well does it do at predicting growth? Let's take a look: 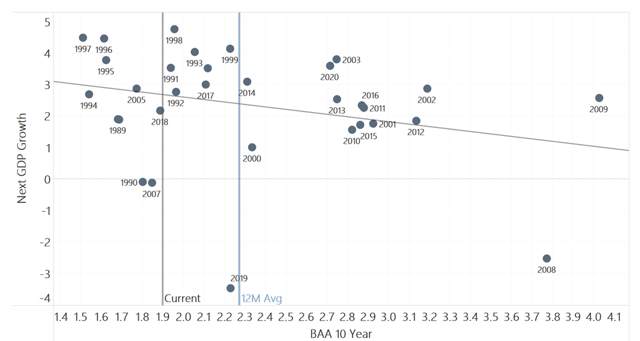 First, we see that, once again, the line is moving in a direction that makes sense with the theory. According to the data, relative increases in the “fear metric” correlate with relatively lower growth, and vice versa. The negative correlation looks, and is, stronger. In our analysis, it looks like Dr. (Bond) Market does a little better than Mr. Stock Market. This is not surprising: Anyone who watches financial television can see that there is a great deal more hype or fear, more emotion in general, conveyed in the world of corporate stocks than in corporate bonds. More emotion could mean more noise. If that's the case, it would help explain why this bond-to-bond comparison seems to be less volatile and less noisy than the stock-to-bond comparison. Dr. Market seems to be doing okay.

Please note that both of these metrics are, as of and according to this analysis, signaling a U.S. economic recovery, with the bond-to-bond comparison signaling a better one.

That's U.S. markets compared to subsequent U.S. growth. What about global markets -- is there a Mousier or a Senor or Herr Market or Market-San who can give us some insights about the rest of the world?

We'll look at that next time.