In the midst of the current crisis we are having a national conversation about how to balance various risks and as of this point, in many states large gatherings such as sporting events, concerts and movies are restricted.

I am not opining for nor against these policies, as it is outside my expertise. The economics of such restrictions is something I do know a little about, and what I know is that although these sorts of activities involved high levels of visibility, the economic output of them is not large in comparison with less visible industries.

First, let’s look at economic output. Although Gross Domestic Product (GDP) is often interpreted as though it describes all economic production in a nation, it does not. The economic statistic which attempts to capture all economic output is called Gross Output. The difference between these two numbers is that GDP tends to focus on the final steps of the economic production process. When you buy something from the store, that’s in GDP. But the steps which occur before goods are in inventory tend not to be captured by GDP. Buying a car? That’s GDP. Building a car? Not GDP. Building the components which get built into a car? Not GDP. Mining ore and refining it into the metals that go into a car? Also, generally not in GDP.

But those things are part of ‘the economy’. They create value. People get paid to do them. Companies make a profit doing them. Investors get returns by investing in the companies that do all of this pre-GDP stuff.

The graphic below shows roughly how large (based on the three year average) the steps before GDP are, the GDP itself is, and how these two aspects of the economy (which roughly correspond to production and consumption) add up to Gross Output.

Now, let’s take this Gross Output and break it down in subsections representing the various sectors and industries.

It’s easy to see which sectors are doing the heavy lifting when it comes to economic output. Finance is almost 20%. Finance provides the capital for every other sector. Manufacturing is almost 17%, and adding construction to that puts the combined sectors at over 20% of output. Professional and business services are over 11%.

Now let’s look at a pie chart which highlights the parts of the economy most under pressure during shutdown conditions. 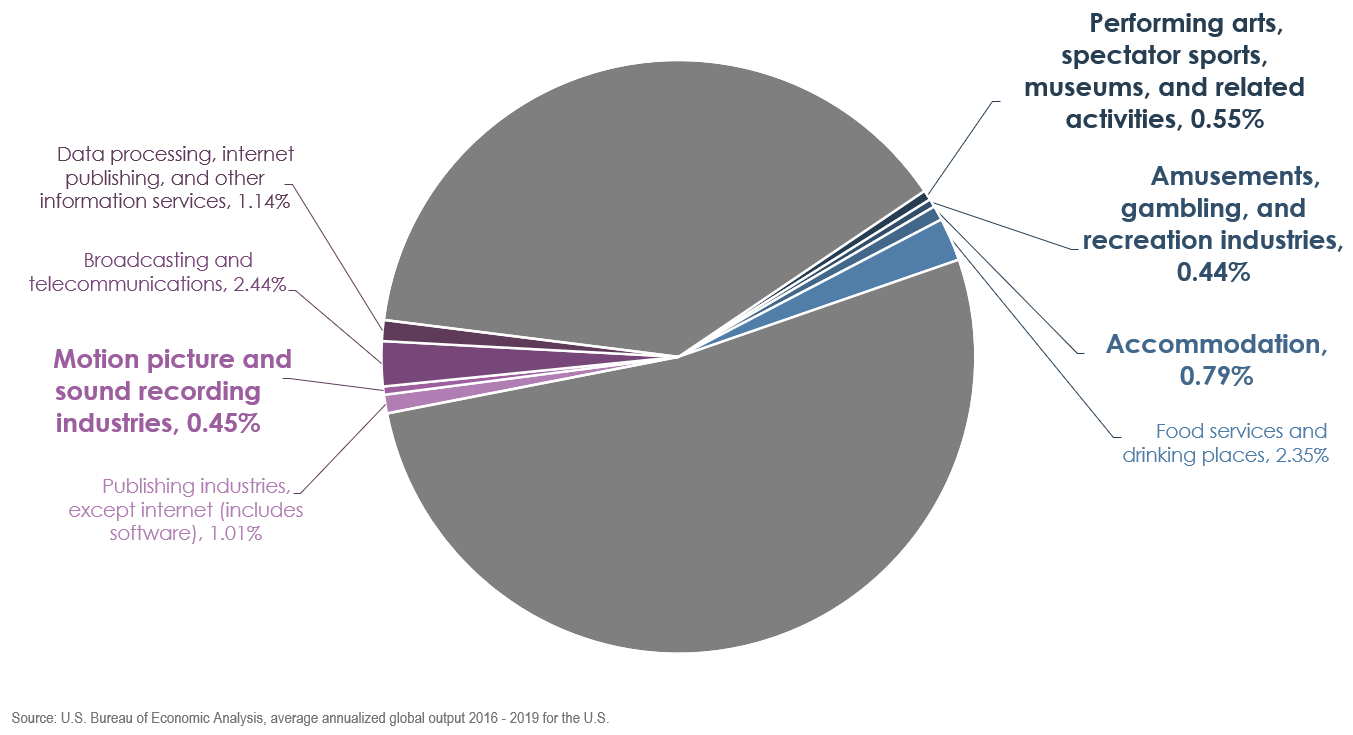 The whole world of electronic entertainment, broadcasting, film and television is only 5% of output. And the whole world of ‘events’, sports, concerts, culture, recreation, accommodation and food service is only about 4%.

And of that electronic entertainment slice, the part which is about producing films and television is less than one half of a percent. The whole zone of spectator activity, sports, culture, entertainment, gambling, and recreation is less than one percent. Empty stadiums and cavernous concert halls make for dramatic TV footage, but not for dramatic macro-economic shifts. The point is that it’s possible to get a lot of economic recovery even with theaters, etc. remaining closed for a while.