Back to Buybacks: Is It More About Dilution Than Concentration?

We mentioned previously in this series that buybacks may not capture everything (or even the most important things) when it comes to the question of whether companies should be concentrating (by taking shares off the market) shareholder ownership or diluting (putting new shares on the market).

We broke those scenarios down into five buckets (also known as “quintiles”, i.e., fifths). 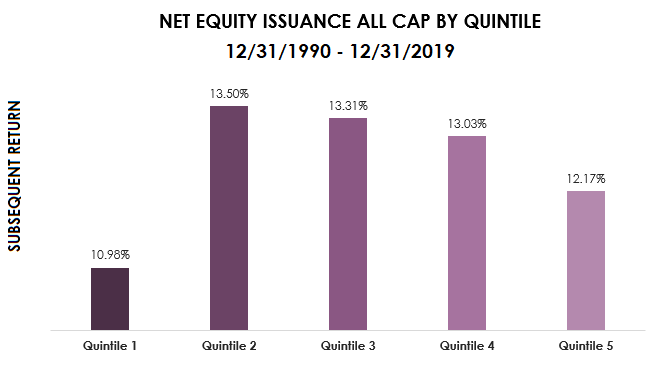 What we see above is that the added value of being a diluter of company ownership, versus a concentrator, was not consistent across buckets. It’s not as though each bucket from ‘worst’ (top fifth, most dilutive) to the second worst, to the third worst, etc. each keep giving better returns. For example, the “best” bucket, labeled “Quintile 5” (meaning the times when companies are mostly buying back their stocks, AKA concentrating rather than diluting), actually performed a bit less well than the second “best” bucket. This is what analysts would call a non-linear relationship, which is simply to say that the relationship between market dilution/concentration to subsequent calendar year performance does not act like a straight line, in which more concentration is uniformly better and more dilution is uniformly worse.

That’s why the scatter chart below, which compares concentration/dilution (from left to right) to subsequent one-year performance (from top to bottom) doesn’t really show a very clear pattern. The regression line slopes down, which means that more dilution tends to be worse, but the pattern is not very clear to the eye because the correlation is not very strong. 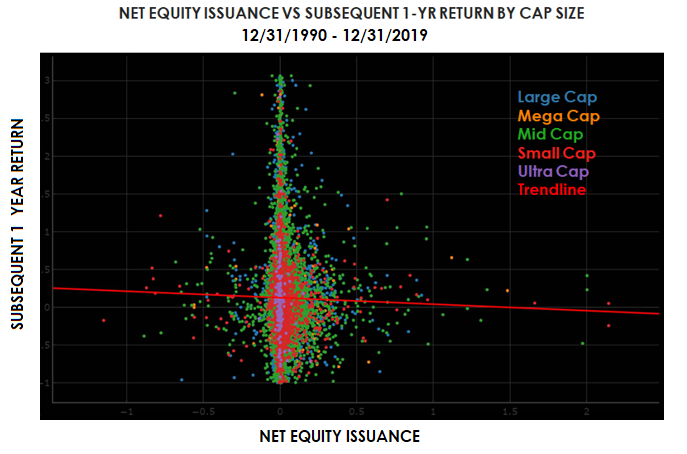 What we see instead is that almost all of the benefit of this metric to hypothetical past investors was found in whether or not the company is in the “worst” 20% or not. Times when a given company in a given year was diluting their shares -- more than the other 80% of companies -- saw significantly worse (about 2.5%) performance than companies which are in the next bucket (that is more dilutive than the bottom 60%, but less dilutive than the top 20%). Further down there is no consistent pattern. What matters most in this particular analysis is whether a company is engaging in high rates of dilution or not.